THIS BABY DOLL WILL BE A JUNKIE 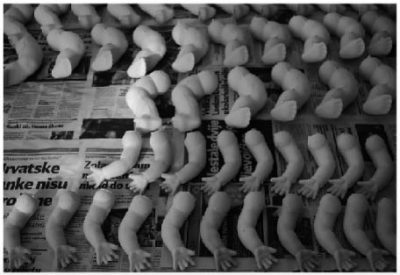 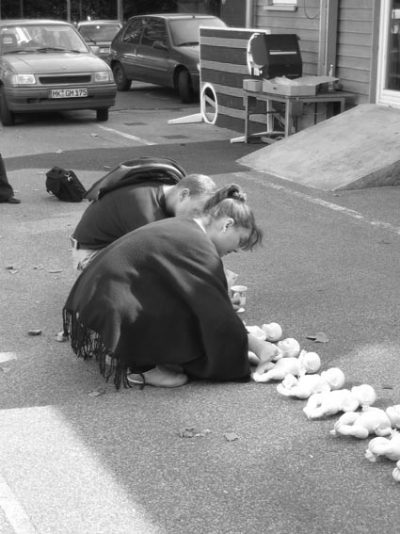 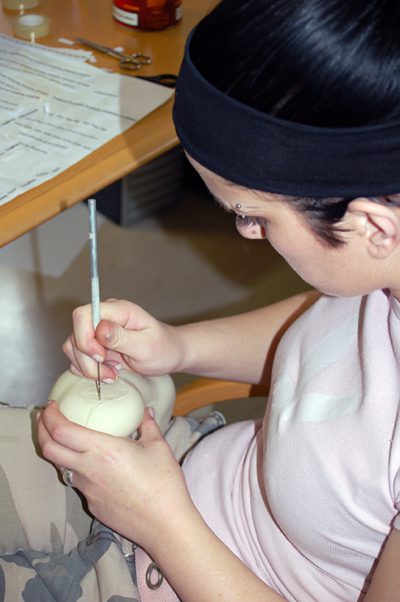 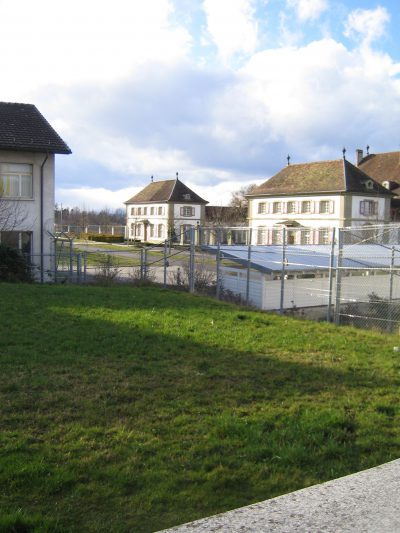 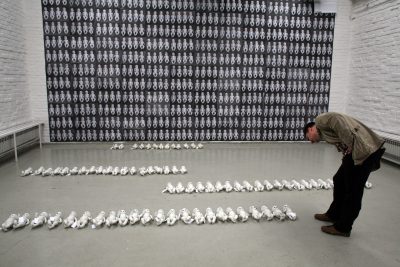 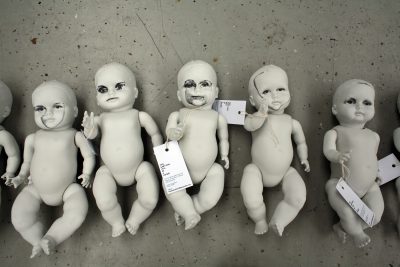 TBDWBAJ is an audiovisual portrait of drug-addicted women in 5 countries in Central Europe. As a marginalised as well as perhorresced fringe group, their lives usually proceed far below the radar of social interest. Their drug use with all its consequences is seen as their personal failure and they are far more morally condemned and ostracised than their male fellow sufferers. TBDWBAJ is an attempt to make the situation of imprisoned women in Germany, Austria, Croatia, Switzerland, and the Netherlands publicly perceptible and together with them to move into different social spaces and perspectives. Using series of identical baby dolls made of porcelain, which are the audiovisual carriers of the biographies of the participating women, the arts-based research becomes an intervention: by abandoning the dolls in public places and thus leaving them to society, the accidental finders decide on how they will be treated and where they will end up. After the Baby Dolls have disappeared physically from the public sphere, the biographical audio recordings remain accessible in the project archive on the OUTCAST REGISTRATION website.

Destined to be a “Junkie”? Collective Predetermination vs. Individual Self-Determination

The title of the project already formulates its central concern: THIS BABY DOLL WILL BE A JUNKIE. On the one hand, this contradicts the common notion that every individual has the right and the freedom to develop independently and in a self-determined way. On the other hand, the Baby Dolls’ life paths seem predetermined: they will be junkies. This also highlights the other side of this common view, which goes hand in hand with the supposed justification of condemning drug addiction as a purely individual matter of personal failure. TBDWBAJ contradicts this idea, and instead researches causes and connections in the lives of the women involved and searches together with them for ways to recognise and publicly articulate them. The aim is not to deny the ideal of individual self-determination, but to focus on its dynamics, causalities, reciprocal influences, and also its incoherencies and imponderables, which are beyond the will and wishes of those affected.

“Some human lives are grievable and others are not,” Judith Butler writes in her 2005 political essay on the American public’s reactions to the attacks of September 11, 2001. It is this “differential allocation of grievability” “that decides what kind of subject is and must be grieved, and which kind must not be grieved.” The determination of this, in turn, serves “to produce and maintain certain exclusionary notions [...] of who is human according to the norm: What counts as a life worth living and a death worth grieving?” (Butler 2005, p. 10) TBDWBAJ rejects the premises of this hierarchical normativity and engages with ostensibly “non-grievable life”. Who can judge the relevance of the violence experienced and who can claim to be worthy of being mourned? Despite the overwhelming, statistically verifiable presence of various forms of violence in the lives of women who are dependent in many respects, they are denied the interest of society in their suffering, and what is more: they are discredited as socially dysfunctional.

The gender-specific focus of TBDWBAJ also encounters considerable skepticism and stands accused of post-feminist approaches; this only makes the far-reaching problematic of this neglected, marginalised group all the more apparent and confirms the necessity of its approach. Therefore, TBDWBAJ is an intervention that understands artistic action in the same sense as Hannah Arendt: for Arendt, the vita activa, the active life, is based on a broad concept of human action that “takes place directly between people without the mediation of matter, material, and things” (Arendt 2020, p. 24) and thus fundamentally takes into account the “fact of plurality” (ibid.); that is, it always takes place in connectedness together and, moreover, publicly. The approach of TBDWBAJ is therefore—using an expression of Karl Jaspers, which Arendt adopts—a “venture of the public sphere”, the outcome of which is open, yet is carried out with a fundamental trust in humans, without which it would be impossible to act at all.

The development of the so-called matrix method arose out of necessity, so to speak, or more precisely, because of a specific need. While working with the women participating in the project, it became apparent that they have enormous difficulties in describing the experiences and events of their lives chronologically or coherently, let alone putting the traumatic experiences of (sexual) violence into their own words. Suggestive inquiries or the interpretation of innuendos are therefore to be avoided at all costs. A pre-printed catalog of terms that can be contextualised both positively and negatively, which are selected and assigned to the respective stages of life, enables the women to provide information about events that had previously been incommunicable without being emotionally fraught or judgemental. In the next step, sentences are formulated from these biographical word collages in the present tense, so that the events of the past are brought into the present—and thus the enduring gravity of the events mentioned remains present. The resulting "basic biography" resembles a protocol that gathers facts as soberly as possible. The dominance of factual information makes it easier for those affected to confront what they have experienced, and the mismatch between the linguistic form and the biographical content renders the import of the experiences described clear to outsiders. The subsequent process of reading out and recording their “basic biography” by the participating women is accompanied by a remarkable effect: for the first time in this way, they experience a kind of legitimisation of their life story, combined with the need to articulate it publicly.

The recordings of the "basic biographies" are then installed in a series of porcelain Baby Dolls. The women learn how to make the dolls as part of the TBDWBAJ project. This process includes working out theoretical issues as well as technical skills issues. Porcelain is the finest and most sensitive of all malleable ceramic materials; it functions here as a cipher for a “blank life” that is to be freely and self-determinedly shaped. As an artefact, the porcelain-white Baby Doll embodies the fragile “innocence” of a child that must be protected, which contrasts strongly with the far from “flawless” or pristine biography of the human being she represents here. Each Baby Doll wears a bracelet bearing the title of the artwork and the URL of the audio files in the OUTCAST REGISTRATION archive.

To be “dropped” repeatedly and thus to be exposed defenceless to the control and violence of others is one of the central experiences in the lives of female junkies. The Drop-Off references this experience of being abandoned by installing the Baby Dolls in the public sphere. Both well-known and lesser-known figures from politics, science, and culture are invited to this intervention to drop off the Baby Dolls of a biographical series in various public places—“drop zones”—that are associated with the author’s sphere of life. Groups of two to four “droppers” take the Baby Dolls by taxi to their destination and there—without further supervision—they are simply left to the public. In this way, the object becomes the property of the general public and at the same time the subject of a public affair. The encounters with random passers-by decide what will happen to them; whether they will be accepted or rejected, ignored or destroyed.

If the passers-by ignore the Baby Doll, nothing happens.

If the passers-by pick up the Baby Doll, a fragment of her biography will be heard.

If the passers-by turn the Baby Doll over, the author’s name and year of birth can be read on her back.

If the passers-by put the Baby Doll down, she stops speaking.

If the passers-by take the Baby Doll with them, her further existence will take place hidden from the public in private space—protected or unprotected like the life of a real child within a family network.

If the passers-by destroy the Baby Doll, its existence ends.

Collaboration on several levels is a core element of all artistic and scholarly work of the OUTCAST REGISTRATION. First, collaboration with the imprisoned women drug-addicts; second, cooperation with the numerous institutions involved; third, combination of different competences in art, culture, and technology; and four, partly discursive, partly cooperative engagement with the public via artistic interventions in public spaces. Finally, fifthly, the close complicity with representatives from various fields of practice and scientific disciplines, who both critically accompany individual stages of the project and discuss and reflect on the country-specific results as well as appraise the effectiveness of artistic intervention in sociopolitical issues during the Expert Meetings.

Aims of the Project

TBDWBAJ initially conducts basic research at the periphery of society: the focus is on the lives of female junkies, which biographical patterns and structural factors are involved in their situation, and how these can be made perceptible. Significant in the lives of the participating women is the “vicious circle”, which comes about because escaping from the cycle of violence, drug use, prostitution, and imprisonment is almost systematically prevented. This form of seriality is reflected in the individual components of the project, in the creation of the matrix and the Baby Dolls, and finally in the drop-off. The conceptual architecture of TBDWBAJ is based on the investigation of different social spaces: the isolated space, the cultural space, and the public space. Each of these spaces describes a phase of the project and adopts a different perspective, which on the one hand seeks to shed light on the processes involved in the actual implementation, and on the other to clarify the expectations and life conditions of different social groups that—often unconsciously or even unintentionally—ultimately share the same space. In this way a modular system is created that can practically be applied anywhere, regardless of country-specific conditions. By drawing together various artistic and media forms of expression as well as theoretical discourses, TBDWBAJ does not maintain existing asymmetries of social relations nor the demarcation of different spaces, but seeks instead to open up an area of reflection in artistic and scientific practice that reveals commonalities and differences. In so doing, TBDWBAJ also addresses the question of what art is capable of doing at the interface with science; indeed, what it must do if it is not content merely to address social issues, but seeks to engage and intervene. This, in turn, involves the challenge of uniting scientific objectivity as an ideal and artistic subjectivity as an equally necessary prerequisite, but without completely levelling their different premises. The far-reaching network of different expertises covered within the framework of the OUTCAST REGISTRATION is both an accompanying instrument and the goal of the project’s implementations, which are intended to generate the circulation of knowledge through communication and reflection.

Complementary to the continuously updated project archive OUTCAST REGISTRATION, the entire project thus far has been published as a dissertation: Ulrike Möntmann, THIS BABY DOLL WILL BE A JUNKIE: Report of an Art and Research Project on Addiction and Spaces of Violence, published in German and English by de Gruyter in 2017.