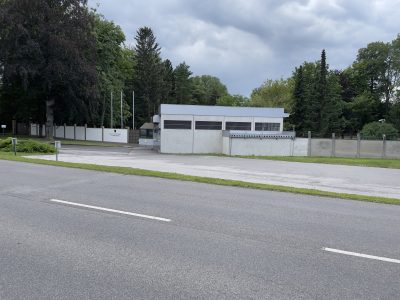 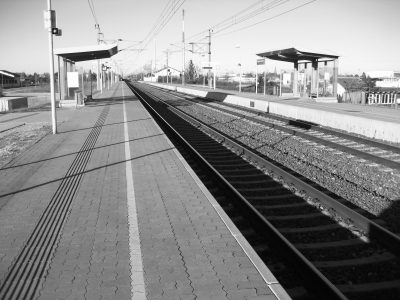 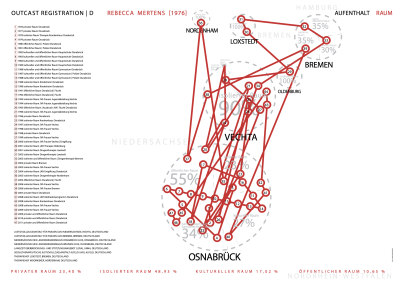 OUTCAST REGISTRATION serves as an archive of all research projects by Ulrike Möntmann and documents their results. The data collected during all phases of the projects enable observations and comparisons to be made of the cultural, social, geographical, and political differences as well as the numerous parallels in the lives of the project participants.

Central to OUTCAST REGISTRATION and the projects are the biographies of drug-addicted women in Europe. In dialogue with the participants, the facts of their biographies are ascertained and put into a specific form with the aid of the Matrix Method, which presents their lives as a sequence of events and decisions, actions and reactions.

The conceptual architecture of the OUTCAST REGISTRATION is based on the study of different social spaces: the isolated space, the cultural space, and the public space. The situation and perspectives of drug-addicted women are made perceptible in terms of their social context in each of these spaces.

Both THIS BABY DOLL WILL BE A JUNKIE and PARRHESIA are gender-specific arts-based research projects focusing on an issue that western European countries have consistently ignored. Although women drug addicts represent “only” 4 to 14% of Europe’s total population of drug users and are thus considered by the legal system and society as a “negligible phenomenon”, around 65% of the inmates in women’s prisons are drug addicts. How can it be that this state of affairs leads to the marginalisation of this group and what has brought them into this precarious position?

The projects receive additional support from the University of Applied Arts Vienna and the Peter Weibel Research Institute for Digital Cultures Austria in the area of Art and Research as well as from the Mondriaan Fonds, Amsterdam, The Netherlands, as well as from other foundations and private sponsors.

initialism for the project title THIS BABY DOLL WILL BE A JUNKIE, which suggests that drug addiction is an unavoidable fate—an ominous prophecy for a human life that has barely begun. On the one hand, it contradicts common notions of freedom, independence, equal opportunity, and individual self-determination as guaranteed, indisputable rights of every individual. On the other, it also criticises a fatal consequence of this ideal, which often goes hand in hand with supposedly being justified in condemning the illness of addiction and the resulting violations of the law as a purely individual matter of personal failure. This failure to mourn those who have already been denied being regarded as a life worth living discredits connectedness and solidarity, that is, the willingness to engage in a shared world in equality and diversity.
to be aware of outsiders, that is, marginalised groups in a society, to register and research conditions they live under, and to demand public visibility for them, is the main concern of this arts and science research project. Such groups all suffer from similar systematic exclusion procedures that push them over and over again further to the margins of society. Unlike their male fellow sufferers, drug-addicted women in European prisons are considered a “negligible phenomenon”. The work of the OUTCAST REGISTRATION counters this by recognising the need of the participants to make their lives a public affair, which ultimately also means laying part of the responsibility for their illness at society’s door.
the projects of the OUTCAST REGISTRATION operate in different topological spheres, that is, in spaces that reflect specific social functions and all have a private (individual) and a public (communal) meaning. The fact that private space is largely excluded highlights the problematic fact that the private sphere in democratic systems is fundamentally—and constitutionally—hidden from public view. While this does protect from state control and interference, it does not protect those who are exposed to (sexual) violence behind closed doors. For all the women who participated in the projects, the private space has never been a protective space, as is clear from their respective biographies—on the contrary. Since access to private space is denied, the OUTCAST REGISTRATION projects concentrate on social spaces that are accessible but under normal circumstances strictly separated from each other, and it is there that encounters or even confrontations are initiated between their inhabitants: — in isolated spaces, where segregated life far away from society is imposed, for example, in prisons, therapy facilities, psychiatric wards, and asylum seekers centres; — in cultural spaces, that is, institutionally legitimised and supported spaces and facilities, including museums, art halls and galleries, as well as, for example, playgrounds, parks, and zoos; spaces that are categorically in contrast to subcultural, secret, or even forbidden spaces for ideas, thoughts, and life styles, which are rejected by the majority and/or officially banished from the public sphere; — in the public realm, which ideally expresses the need and obligation of all people to be able to articulate in public everything that concerns all us, independent of whether they have been granted, have acquired, or have coerced authorisations and privileges. In the sense of Hannah Arendt, the sphere of what is public is not only a possibility, but rather a call to action.
comes from the Greek and means “freedom of speech” or “talking about everything”. It is the key theoretical concept of the eponymous project PARRHESIA: THE RISKY ACTIVITY OF SPEAKING THE TRUTH, which is based on Michel Foucault’s remarks on parrhesiastic speaking the truth. Drawing on the ancient tradition of truth speaking that can be traced back to Euripides, Foucault defines parrhesia as “a kind of verbal activity where the speaker has a speciﬁc relation to truth through frankness, a certain relationship to his own life through danger, a certain type of relation to himself or other people through criticism (self-criticism or criticism of other people), and a speciﬁc relation to moral law through freedom and duty. More precisely, parrhesia is a verbal activity in which a speaker expresses his personal relationship to truth, and risks his life because he recognises truth-telling as a duty to improve or help other people (as well as himself). In parrhesia, the speaker uses his freedom and chooses frankness instead of persuasion, truth instead of falsehood or silence, the risk of death instead of life and security, criticism instead of ﬂattery, and moral duty instead of self-interest and moral apathy.” (Source: Michel Foucault, The Meaning and Evolution of the Word Parrhesia in Discourse & Truth: The Problematisation of Parrhesia, 1999, 6 lectures at the University of California at Berkeley, CA, Oct.–Nov. 1983. https://foucault.info/parrhesia/foucault.DT1.wordParrhesia.en/)
a pre-printed catalogue of terms, both positively and negatively contextualisable, which are selected and assigned to the respective stages of life, and enable the women involved to provide information that is not emotionally charged or judgemental about traumatic experiences that had previously been impossible to communicate.
a biographical protocol that uses the Matrix Method to collect facts as soberly as possible which is devoid of emotional suggestion. From the resulting collages of words the biographers formulate sentences in the present tense, so that the events of the past are brought into the present.