PARRHESIA: THE RISKY ACTIVITY OF SPEAKING UP AND SPEAKING OUT 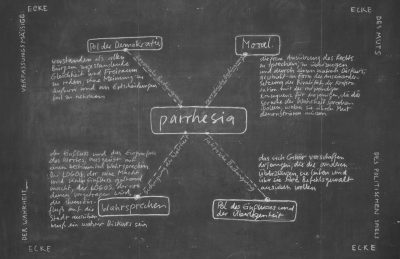 PARRHESIA: THE RISKY ACTIVITY OF SPEAKING THE TRUTH

This project continues the artistic and scholarly work of the Outcast Registration, which investigates the living conditions of female drug addicts in prison before and after the onset of their addiction. In a European comparison, social, political, legal, and cultural similarities and differences will be made visible. To expand areas of activity and the circulation of knowledge with regard to the Outcast Registration network, the findings of the projects conducted in central Europe (see TBDWBAJ) will be supplemented and extended by a number of projects to be conducted in prisons in northern and southern Europe. To what extent is the treatment of drug-addicted women in countries as different as Italy and Denmark, for example, paradigmatic or representative of their social systems? The central issue is one of principle: Can the recounting of one’s own life story in public be an effective emancipatory act? And how can the effects of such self-empowerment through a speech activity be utilised already inside the prison using new questions and research methods to thematise the living conditions of drug addicted women in Europe as a matter of concern for the whole of society?

“Women don’t run away— not from situations or from prisons”

This rather laconic but extremely consequential observation made by a prison director was confirmed by the findings of the Outcast Registration projects conducted so far: the women experience themselves as guilty in principle and justifiably imprisoned — prison walls and barbed wire are in fact superfluous. This in no way diminishes their suffering from a life on the streets and in prison, characterised predominantly by (sexual) violence; on the contrary: being structurally condemned literally to voicelessness — which also means to defencelessness — makes their situation infinitely worse. Michel Foucault understood that prison walls not only have the function of preventing prison escapes, they also prevent society at large from engaging with the phenomenon of prison. Therefore, the task is to find ways out of this silence and show the organised as well as internalised invisibility of these women.

Parrhesia: The Courage and the Duty to Speak the Truth

The key theoretical concept of the project is Foucault’s conception of parrhesia, which describes the courage and the duty to speak the naked truth, to take up a stance sincerely and candidly against the established order in full awareness that, potentially, there is a risk of being penalised or punished. This conception is based on the conviction that even a seemingly powerless individual can confront a powerful individual and so bring about improved conditions of life for oneself and others. For Foucault it is not a matter of problematising the complex idea of truth per se, but of recognising that speaking the truth is an emancipatory activity. The parrhesiastes, someone who speaks the truth as directly as possible, does this in the public sphere and thus underlines its political, ethical, and cultural dimensions. The focus of the project is to explore free, frank, and critical speaking under risky conditions. It is risky because parrhesia is always conditioned by hierarchies and therefore reveals existing disparities: in this case starting from the position of incarcerated, drug-dependent women relegated to the utmost periphery of society who address the very society from which they have been banished because they have supposedly proved themselves unworthy of it.

The Tragedy of Real Life

Based on material taken from Ancient Greek tragedies, which deal in different ways with their characters’ desperate quest for the truth about their origins, Foucault illustrates the significance of speaking the truth. In Sophocles’ Oedipus Rex (ca. 429–425 BCE), for example, the participants attempt in vain to escape their grim fate, yet without questioning the Oracle’s prophecy itself. In the end the truth comes to light rather by accident and with no action on their part. In Ion by Euripides (ca. 418–417 BCE) Ion and his mother Creusa decide to speak out in spite of existing rules and hierarchies in order to rid themselves of injustice and oppression, of imposed dependencies and feelings of shame, even though their revelations could threaten them with dire consequences. The essence of both tragedies is “guilty through no fault of their own”, which is also the leitmotif in the lives of female drug addicts. Both in literature as well as in real life people become the victims of abominable acts, which have devastating effects on their development into independent individuals, on how they function in society, and thus on society itself. In all the life stories of the project participants there are accounts of rape, assault, gross neglect, and abuse from childhood onward. Whereas in the fictional Tragedy as in real life the (sexual) perpetrators are predominantly fathers, uncles, brothers, lovers, and neighbours; trusted persons rather than outsiders, the physical and mental neglect is permitted mainly by mothers and grandmothers.

On the one hand it is significant that women are censured far more for failing in social and reproductive roles than drug-addicted men and fathers. From the mainstream point of view motherhood and drug consumption are irreconcilable, whereas drug-addicted fathers have the less detrimental connotation of mere absence, which is considered less harmful. On the other hand it is transparently clear that disaster on the stage is looming, but cannot be averted in spite of the best efforts of the protagonists, and that the audience will understand the causal connections, and will not only understand but empathise with the decisions the protagonists are obliged to make; the audience is able to review the situations, take sides, take up a stance. What we see on stage is their courage in placing the truth at the door of the originators of their suffering, and in this way freeing themselves from calamitous power relations. Such transparency and clarity is urgently needed by the real women in prison. Cathartic effects, therefore, should first arise in them, but also in a society that is indifferent and has so far looked away.

The goal of parrhesiastic speaking the truth consists not only in seizing the initiative in the public sphere and taking a clear stance, but above all to articulate a position vis-à-vis the established order and reprehensible moral convictions — also at the risk of jeopardising one’s own safety and existence. Foucault proposes the term “speech activity” as the translation of parrhesiastic speaking, to distinguish speaking the truth and the commitment it entails from the usual manner of speaking which one uses to identify oneself. In this respect parrhesia is based on a strongly performative understanding of what speech acts are: this is absolutely central in this context because it serves self-empowerment. Because the women accept their disqualification in the eyes of the community as self-evident and justified, even to the extent of trivialising what they experienced, they regard only themselves as the guilty ones, as those solely responsible for a disastrous life constellation in a so-called revolving door effect. People who regard themselves as both unimportant and guilty are hardly capable of speaking freely and frankly about decisive and significant events.

From the Matrix Method to the Biographies

With the aid of the Matrix Method, which was developed out of necessity, the women participating in the project are able to reconstruct and speak about biographical events and contexts. Without any restrictive guidelines or emotional suggestions, from a catalogue of around 160 basic terms they choose words applicable to them and their lives. Selecting, combining and ordering the words enables them to see that the effects of traumatic experiences no longer lie beyond causality — without lapsing into standardising their lives, acceptance of fault, or apportioning of blame. The biographies that are constructed in this way enable the project participants to speak for the first time about their lives before and after the beginning of their drug addiction, and strengthens, as the previous sections of the project have shown, their need as well as the necessity of making themselves heard, publically.

Goals of the Project

The initial question contradicts the widespread cliché that junkies have nothing significant to say. In arts-based research and practice the biographies of the inmates are collated, and contextualised with the frequently totally disproportionate penal consequences of their addiction in order to problematise that the marginalisation of female junkies is a negligible social phenomenon.

In society’s most isolated spaces the project participants discover art as a possible space for activity without ifs and buts, theorising, and without questioning the given, undoubtedly asymmetric relationship of the project leader to the women participating. To meet in openness and to be able to speak the naked truth triggered a paradigm shift in our collaboration: in this new situation characterised by frankness the usual self-justification or resignedness to one’s own precarious situation gives way to the common ambition to speak the truth or, as Foucault put it, to commit oneself to the truth. In the process recurrent patterns and contingent structures in the biographies come to light and also particularly the discrepancies in the proportionality: of the offences committed as a result of addiction and the sentences passed; of the criminal offences committed against these persons from early childhood onward which were neither reported nor prosecuted nor ever will be.

“Parrhesia: The Risky Activity of Speaking the Truth” is a gender-specific study, which is an interdisciplinary amalgamation of art and social science that analyses and critically reflects on an issue that concerns society as a whole from a variety of perspectives. The planned project once again takes up the challenge of exploring what arts-based research can accomplish — and what it cannot. The question of how art can enrich the sciences and vice versa is phrased dynamically: art does not only serve the accumulation of knowledge but also addresses the perpetually changing conditions of life.

Art is thus expanded in its role as a socio-political intermediary; the utilisation of aesthetic media becomes an instrument of visibility and representation. Art intervention and empirical data collection prove to be effective and complementary investigative methods that can be applied in an interdisciplinary context. Within the framework of new contacts to research institutes, especially in countries where the project will be carried out in the future, a large-scale network is being established with expertise that will promote and enrich arts-based research on possibilities for socio-political interventions in the long term.